Suwałki Gap and Vilnius, Lithuania – In Vištytis, in southwestern Lithuania, the atmosphere is tranquil.

But this sleepy little town, home to green meadows, a lake and quaint cottages, found itself at the center of geopolitics this year, after Russia invaded Ukraine on February 24.

Vištytis is on the border with the Kaliningrad region – a heavily militarized Russian enclave bordering Poland and Lithuania, where Moscow is believed to have nuclear weapons.

“We bathe in the lake about ten meters from the barbed wire fence. Sometimes you can hear the border guards on the Russian side playing music. When that happens, we have a barbecue and dance to the music that comes from the tower,” Irina Skučas, a factory worker, told Al Jazeera.

Living on the border

She and her husband Gediminas have coexisted peacefully with their Russian neighbors for about 20 years.

“The Russians never did anything to us,” she said.

“But when they closed the border with Russia, many cheaper construction materials stopped being transported to the Russian side. So, for example, the nails we use to pierce walls or hang electrical cables now cost three times as much because they come from somewhere in Europe, not Russia. 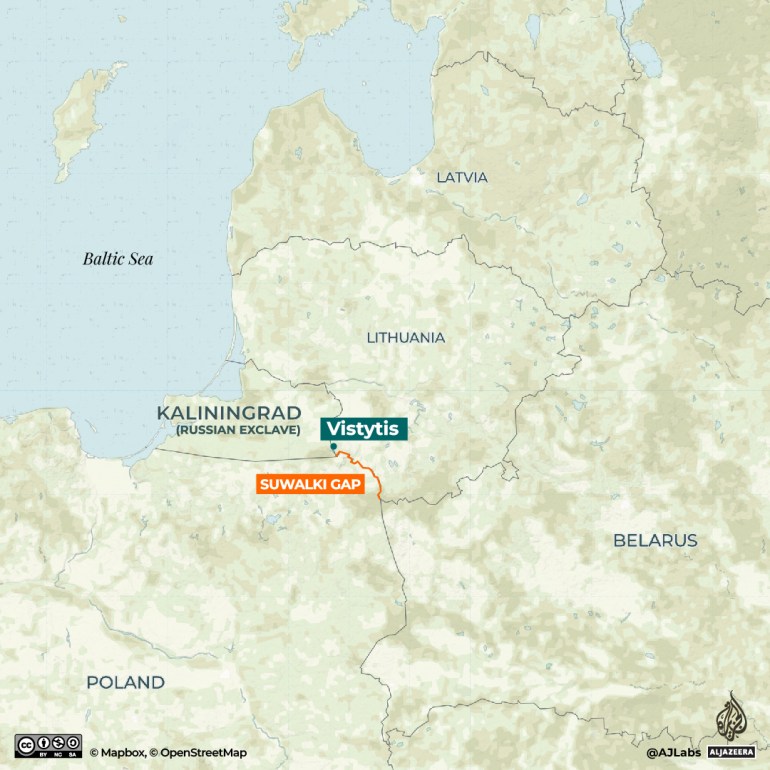 His town is located at the northwest end of Suwałki Gap – a strategic 100-kilometre (62-mile) strip of land along the Lithuanian-Poland border, connecting Kaliningrad in Russia with Belarus.

Experts have called it “the most dangerous place on Earth”.

But locals – many of whom lived and remember vividly Soviet times – find the claim laughable.

“Everyone is using alarmist language on all sides. Simple people like us really see it from a different perspective,” Gediminas told Al Jazeera. “They say we’re at war now, but that’s not the reality we see here.”

After Moscow deployed troops to Ukraine, Lithuania imposed EU sanctions and closed its borders to Russia. Its army is also preparing for any possible Russian aggression.

“We have to start thinking as if we are living in a war,” Lithuanian Defense Minister Arvydas Anušauskas told reporters in Rukla, a small central town, on October 8.

Yet about 90 km (56 miles) from Irina and Gediminas, at the southern tip of the Suwałki Gap, 24-year-old Neringa Kilmelyte shares a similar view.

Neringa lives in Kapčiamiestis, a village near the Belarusian border, which was also a sticking point during last year’s border crisis, housing some of the displaced people from Belarus in the local school.

“Here you live day to day, without planning ahead. It’s the Lithuanian mentality,” Neringa, who returned to Kapčiamiestis to give birth to her son, Joris, told Al Jazeera.

“In Alytos, where I used to live, I already saw armored vehicles passing by regularly, so it’s part of everyday life,” she added.

Many of Neringa’s friends joined the army or volunteer militias like the Union of Lithuanian Riflemen as the Russian-Ukrainian war escalated.

According to the Union, thousands more applications for membership have been made this year. A volunteer told Al Jazeera there was a two-and-a-half-year waiting list.

In 2015, conscription was reintroduced in Lithuania after the Russian annexation of Crimea in 2014.

Those recruited are currently training with a new German-led combat unit in Rukla.

The brigade was set up following a NATO summit in Madrid, which overhauled defense planning in the Baltics to repel any attack in real time.

“One thing is certain. The current situation means that we have to do more together,” German Defense Minister Christine Lambrecht told reporters at the inauguration of a permanent German command center in Rukla.

In the Lithuanian capital Vilnius, Vaidotas Urbelis, political director at the Ministry of Defence, told Al Jazeera that his country enlists 4,000 new conscripts a year.

“The worst-case scenario is a big war in Europe and there are signs that it could happen. No one can predict what Putin will do. We have to make sure the army is ready. It means more manpower and more reservists,” he said.

“Militarily, we do not distinguish between Belarusian and Russian military. Lukashenko has no control over his army, it’s just an extension of Putin and Russia,” he added.

“It’s an old saying from Roman times that if you want peace, prepare for war.”

Besides defensive tactics, to help civilians, the Ministry of Interior has also released a map with safe shelters and buildings, to be used in case of emergency.

Vytas, a former military man in his 40s, has resurrected an abandoned World War II bunker.

In the unlikely scenario that Lithuania is attacked, that’s where he will go.

“That’s not going to protect me against a modern-day bombshell. Weapons are too sophisticated today,” he told Al Jazeera.

“But the thick walls of the bunker would provide some radiation protection, but probably not if a nuclear warhead were dropped nearby. I don’t think you’d be safe if that were to happen.

Meanwhile, others, like 33-year-old Pawel Andrul, have adopted a relatively calmer attitude.

“It’s somewhere in the DNA of Europeans not to be afraid,” Andrul, who lives in the Polish town of Suwalki in the Suwalki Corridor, told Al Jazeera.

“Concerns about this Russian aggressor are constantly present in Polish society,” he added.

Known for its scenic landscapes, synagogues and churches, Suwalki is a multicultural place.

But Poland’s controversial history with the Soviet Union is etched in the minds of the people of Suwalki.

“The Poles here don’t like the Russians. They haven’t forgotten massacres like the one in Katyn,” he added.

The Katyn massacre of the 1940s took place while Poland was under Soviet rule and resulted in the mass execution of thousands of Polish military officers.

Andrul stressed that if Russia were to invade any of Poland’s neighbors and target towns that dot the Suwalki Gap, Warsaw would step in to help.

“It’s Poland’s business to do that,” he said.

“I’m sure other countries will help if the Russians come here. Let’s not pretend that Lithuania can defend itself against an invasion,” she told Al Jazeera.

A stone’s throw from Neringa’s house, Jonas Sukditis, 70, and his wife Vida, 68, follow the war in Ukraine on their television.

Commenting on Russian President Vladimir Putin’s latest threats against Ukraine and other NATO countries, Jonas told Al Jazeera: “We are just small pieces. Chess pieces, really. For the greatest powers to come into conflict with each other.

He stressed that “war” was in their blood and that he and his wife were ready for any emergency.

“We have seen so many things like this throughout history that we have a basement that we could go into if bombs fell on us. The basement is full of food supplies and other useful things,” said he said, stroking his cat.

The fear of war is a distant and quiet concern – as it has been for many years – for people in the former USSR.

For many like Irina, the biggest worry is that political rhetoric and warmongering will take over and perception will become reality.

“We have experienced so much of this uncertainty throughout history,” Irina said. “Then why worry? If the war starts, the war starts.

Mantas Narkevicius contributed to this report with translation services.